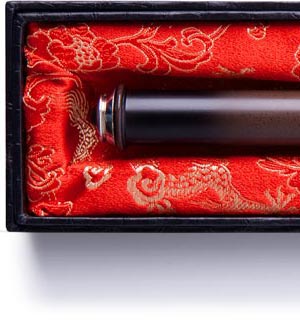 A strong box protects and displays your Kymera Wand

For thousands of years people have dreamt of using magic to conquer the world around them. Now at last The Wand Company has conjured up a real magic wand that brings that power within your grasp, letting you control things around the home with easily-mastered flicks of the wrist or swishes of the perfectly-formed tip of your Wand. 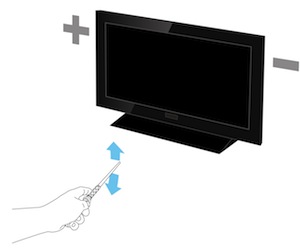 Change TV channel with a simple flick of the Wand

What's in a name?

The word "Kymera" comes from the name given to a fabulous fire-breathing mythical beast called the Chimaera. With its lion's head and serpent's tail the Chimaera was a formidable mixture of different creatures. Thus the Kymera Wand gets its name from its curiously satisfying blend of ancient values and modern technology that makes it what it is, because hidden well beneath the seamless cloak of the lovingly-designed Victorian form, beats a electromechanical heart of pure sci-fi wizardry. 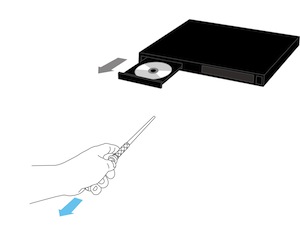 Open your DVD tray with a "pull-back" gesture

The Wand's amazing abilities come from a number of high-tech components packed into its slender body. Amongst these, four critical elements turn the pretty stick into a magical piece of electronics. A tiny micro-electro-mechanical accelerometer (or MEMS) device, sensitive enough to measure the force of gravity, senses the movement of the Wand in three axes; up and down, side to side and backwards and forwards; a microprocessor to monitor the output of the accelerometer and apply special algorithms to the output to determine if the movement of the Wand is one of the 13 predefined gestures; an infrared code learning and playback integrated circuit (IC) that remembers the codes of the remotes you teach it; and a miniature vibration motor that beats like a tiny heart.

It always knows which way is up

The Kymera Wand is clever, and as you would expect with a magic wand, it always knows which way is up, adjusting its view of the world continuously so that however you turn, twist or flick it, or whichever way you pick it up, a flick to the left (for example) is always recognized as a flick to the left. The Wand also tells you what it is doing by pulsing with gentle heartbeats in your hand. This means that once you have learned its ways, no one else need know how you are communicating with the Wand and using it to control the things around you. It discreetly pulses giving you haptic feedback as to what gestures you have done and whether or not it has sent an infrared code.

The Kymera Wand is luxuriously presented

Perfectly weighted for balance in the hand, the Kymera Wand is both protected and displayed in a simply gorgeous silken-lined presentation box, covered with black faux-dragonhide. The Wand itself is made from tough, resilient ABS that has been treated to over 20 hand-finishing steps in order to give it an antique appearance. The battery door is turned from a single piece of steel, polished and then nickel plated for a really high-quality lustre.

To complete the fantasy look and feel of the whole presentation, the Kymera Wand's manual is printed on a parchment-like paper and folds out as an attractive poster, 535mm x 360mm in size, designed to look like to pages from an antique manuscript.

Use your Wand to control stuff around the house

It is important to practice with the Kymera Wand 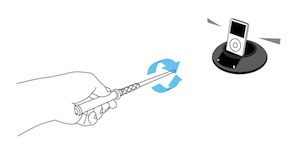 The Wand is great for controlling your iPod through its dock

Before you can use your Wand, you will need to practice to make sure that you can do all the gestures correctly and then teach your Wand some codes from your existing remote controls. Practicing with the Wand is fun and easy, and a necessary part of getting used to the Kymera's gesture recognition technology. Unlike dreary press-button remote controls, the Kymera interprets your actions and so you must accurately perform one of 13 different gestures in order to get it to do what you want it to.

When you unpack the Wand and use it for the first time it is already in practice mode. The Kymera Wand has no lights so it tells you what it thinks you are doing by pulsing (vibrating) gently in your hand. In practice mode, the Wand will pulse a different number of times for each gesture: you perform the gestures one at a time and after each gesture you count the number of pulses you feel. (For example, "flick up" is three pulses and "flick down" is four.) Most people only have to practise for a few minutes to get the hang of the Wand's gestures, which only require short, positive movements.

Once you have mastered all the gestures, you are ready to move on to programming the Wand, by teaching the infrared codes from your existing remote controls.

13 gestures will let you control iPods, TVs, DVD players, lights and much more

After the Wand has been programmed it will pulse only once for each gesture onto which a code has been learned, if that gesture is performed correctly. The Wand can learn remote control codes from a wide variety of household devices. In fact, almost anything that uses an infrared remote control can be controlled by the Kymera Wand (except for Bang & Olufsen equipment).

The Wand can also be used to control televisions, and the flick up and flick down gestures make for a fun, simple way to browse through the channels. Although it has only 13 gestures and therefore can only be programmed with 13 remote control codes, this is more than enough to get basic control and EPG navigation of your Sky+ set top box. There are even infrared remote control light switches and bulb holders (which have to be bought separately) which, when used in conjunction with the Wand, will enable you to control the lights in your house with a magical flourish of your Wand. The iconic TARDIS is officially replicated as this unique cermaic cookie jar.It features a rubber seal around the lid to…